Passover is a celebration of freedom from slavery and the end of oppression. How does it make sense to exploit and eat animals that have been oppressed and held captive for a holiday celebrating freedom?

Passover is a Jewish holiday about freedom. It commemorates liberation of the Israelites from ancient Egypt and their Exodus from slavery. This eight-day festival happens in the spring during the Hebrew month of Nissan. This year, the first seder starts at sundown on March 30 with the second seder the following night. If you have never attended a seder before, call a Jewish friend and politely invite yourself over.

A traditional Passover seder is a ritual that is conducted as part of the overall Passover observance and includes reading from a book called a Haggadah. This book tells the story of the holiday dating back to ancient Egypt.

Like with many religions, there are several degrees of Jewish observance and some families read the entire Haggadah, while others do a faster version. However, all seders contain a festive meal and seder plate. The plate is a nicely decorated centerpiece with symbolic foods. Needless to say, don’t eat off this plate until the designated time!

“I don’t mind taking the extra time in order to save lives. After all, Passover is a celebration of freedom.” 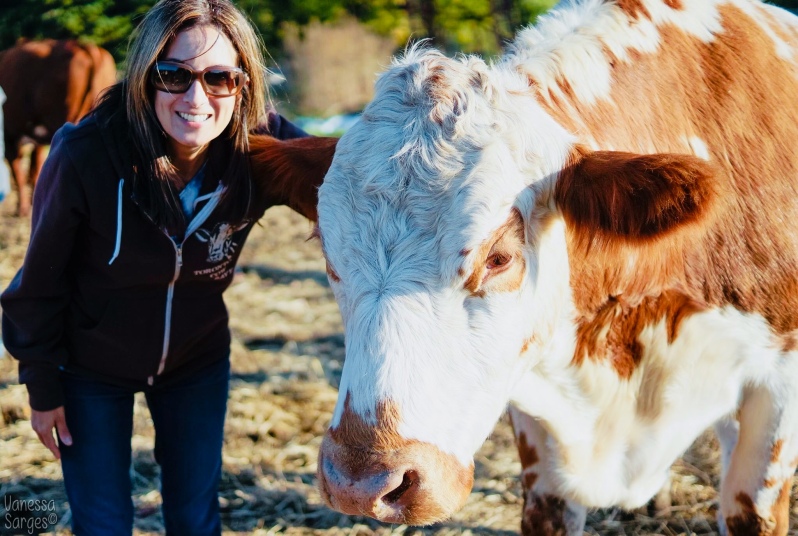 You probably know it’s forbidden to eat bread on Passover. This is to remember what the Jews ate when they escaped Egypt. They didn’t have time for their bread to rise and ate flat unleavened bread, otherwise known as matzo. In Hebrew, this forbidden bread is called Chametz and defined as all leavened grain and anything made with yeast. So, besides bread, the forbidden foods include cake, cookies, cereal, pasta, wheat, barely spelt, rye and oats. And to make things more complicated, the tradition for Ashkenazi Jews includes not eating corn, rice, peas, beans and, yes, even tofu, since it’s a soybean. The good news is that quinoa is permitted because it’s a seed, not a grain.

Each year at Passover, I make a seder for my son Noah. We are both vegan and follow a plant-based diet because we love animals. We don’t eat meat, fish, dairy, eggs or any products containing animal ingredients, like gelatin or honey.

I don’t mind taking the extra time to find humane alternatives in order to save lives. After all, Passover is a celebration of freedom from slavery and no longer being oppressed and held captive.

Here are a few essential ceremonial items, and how you can keep them vegan.

Most matzo is vegan since the main ingredients are flour and water; just be sure not to purchase egg matzo. Three pieces of matzo are placed on the table in a special matzo covering. I still use the one Noah made for me in kindergarten.

Seders include wine for adults and grape juice for children. There are four cups of wine or grape juice throughout the meal that are drunken out of beautiful silver Kiddush cups. It may come as a surprise to you that not all wines are vegan, but there are many vegan wines.

Barnivore is a great resource for searching for vegan wines. You can also contact or research individual brands for their refining agents and decide what is acceptable to you in terms of cross-contamination.

On the first two nights of Passover, candles are lit. As long as you don’t use beeswax candles, you are good to go!

“Hopefully one day all species will be free from oppression.”

This food is mostly for decoration, although some of it is eaten at specific times during the seder. I have consulted multiple sources to create our vegan Passover seder plate; you can be creative and add your own vegan flair.

We love lambs and of course don’t eat them, but we also don’t want a body part on our seder plate even just for decoration. I use a beet instead of a blood-red bone. Beets are dark in colour and can symbolize the bloodshed of the slaves.

No eggs for us! Free range eggs are not a real thing and the egg industry is built on lies and endless cruelty. If chickens cannot give us permission, we don’t take what is not ours. Eggs are a symbol of new life and hope for the future and the round shape is the cycle of life. Luckily there are endless alternatives to round foods. I typically use a little white turnip. Other ideas are oranges, avocado pits, or even a plastic or wooden toy egg.

Vegan approved! These are usually horseradish root (and no horses were killed in the growing of this veggie)! Other choices include bitter greens like dandelion or radish.

Parsley is dipped in salt water and represents the salty tears of the slaves in Egypt. Other vegetables that can be used are potato, celery or a small slice of onion.

It’s usually romaine lettuce and eaten with the second portion of the bitter herbs.

This is typically a sweet mixture and can easily be made vegan. It’s made with chopped apples, walnuts, spices, and red wine or grape juice. If the recipe calls for honey I swap it for agave nectar. Freshly ground cinnamon tastes great sprinkled on top!

This piece of matzo is hidden during the seder for kids to search for later. The seder cannot be completed until the afikomen is found and everyone at the table eats a small piece. Think of it as a matzo treasure hunt that concludes the meal, though at many seders the joyous songs go long into the night in celebration of freedom around the world.

Hopefully one day all species will be free from oppression.

This article was originally published in The Huffington Post in 2017.